skip to main | skip to sidebar

High hopes for the High Line

New Yorkers campaigning to turn an abandoned elevated railway into a public park feel they are now on the right track, reports David Teather

One of the undiscovered treasures of New York snakes along a 1.5-mile stretch of the West Side of Manhattan - a former elevated railway abandoned for the past 23 years.

Few New Yorkers seem even to know of the existence of the rusting but elegant iron structure. The High Line stretches from Gansevoort Street in the meat packing district and into Chelsea, terminating at the far reaches of West 34th Street. It is seven acres of open space up to 80ft-wide perched three stories high in a city where space is a premium.

Local retailers have for years tried to get the structure torn down, complaining that it leaks, is infested with pigeons and is depressing property prices. They almost succeeded in 1992 but failed to agree who would foot the bill.

The railroad, which closed in 1980, was built in the 1930s to carry freight into Manhattan's then industrial West Side, with spurs connecting into various warehouses. But the neighbourhoods that the High Line cuts through have changed in the intervening years, gentrifying and in the case of the meat packing district becoming one of the hottest parts of New York: many of the warehouses the railway fed are now luxurious apartments. Chelsea is the art hub of the city.

Attitudes to the railroad have also changed. A powerful lobby has formed to turn the stretch of land into a public park. Nature has already reclaimed the railway, providing a glimpse of what could be done.

A handsome book, Walking the High Line, by the photographer Joel Sternfeld, ably displays the potential of the track. The track is private property and is not supposed to be open to the public, although as the book shows, some enterprising souls have been tending parts of the garden.

The photographs show astonishing images of meadows, saplings and wild flowers growing over the sometimes visible tracks, banked by rarely seen views of New York's familiar buildings. They present a curiously quiet and doleful picture, as though the city has been abandoned - the elevation means no people or traffic are visible - giving a hint of what a haven it could be if turned into a park.

At a hearing this month the city council earmarked $15m (£10m) to plan and design a project to convert the railway. The plan has some powerful backers. Mayor Michael Bloomberg, unlike his predecessor Rudolph Giuliani, supports the idea, as does New York senator Hillary Clinton.

The lobby was started by a not-for-profit organisation called Friends of the High Line. They estimate it would cost up to $60m to convert the space and recently launched a competition asking designers and architects to draw up designs for the site. It attracted more than 700 entries and a selection went on display in Grand Central station last week.

Entries include a sculpture garden, an outdoor swimming pool and an amusement park featuring a big apple roller coaster. Perhaps the most appealing of all is to leave it as a wild meadow, countering the very urban environment towering over it. Whether the structure is preserved is now up to the city's transportation board, but the once far-fetched notion seems likely.

The company that owns the railway, CSX Corporation, has made it clear it doesn't care what happens to the track, as long as it is fairly compensated.

In the past, New York could perhaps be accused of not taking enough pride in its incredible array of buildings. Penn station, which once matched Grand Central, was pulled down and replaced with a sweaty bunker underneath Madison Square Garden. The opulent Metropolitan Opera House on Broadway and West 38th Street was reduced to rubble to make way for skyscrapers. It was only the intervention of Jackie Onassis that saved Grand Central.

The High Line was originally 13 miles long, but large chunks were pulled down. That trend appears to have halted. In a city squeezed onto a small island and where real estate prices are astronomic, it is always a surprise to stumble across undeveloped land. But the High Line is a terrific example of the slightly eccentric urban beauty that New York does so well and it deserves to be preserved and opened to people living in the city looking for some precious outdoor space.
Posted by olivia at 15:28 No comments: 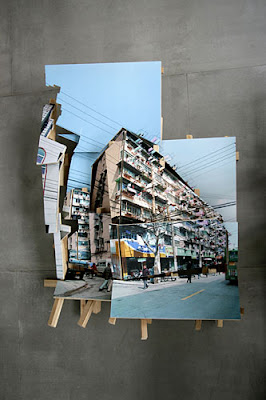 Isidro Blasco's work is all about urban space and its effect on our quotidian. Born in Spain and based in New York, Blasco, who is a trained architect, uses photography and sculpture to study Shanghai's urban sprawl.
His work can be seen at Contrasts Gallery in Shanghai until through May 7.
181 Middle Jiangxi Road, G/F
Shanghai, Shanghai 200002 China
Tel. +86 21 6323 1989
photo courtesy Contrasts Gallery
Posted by olivia at 11:19 1 comment: 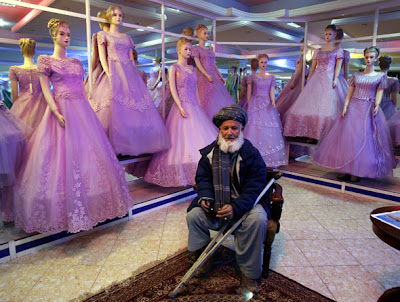 Waiting while the family shops in Kabul, Afghanistan

Naturally 7 in the Metro 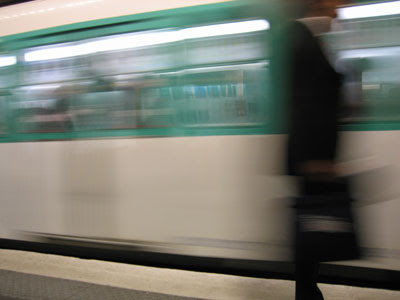 
photo courtesy of out-of-sync.com
Posted by olivia at 09:51 No comments:

Cities on the Edge of Chaos

In last Sunday's Observer there was a feature by Deyan Sudjic, director of London's Design Museum, on how cities are taking over the world. Sudjic studied 6 of the world's key cities over a period of two years and his findings are compiled in a new book called Endless City, published by Phaidon.
Here are a few hair-raising, or as the French would say, "décoiffant", statistics:
76% of Mexico's population live in urban areas
16m2 is the average living space in Shanghai
88% of homes in Berlin are rented
$1.3 million is the average cost of an apartment in Manhattan
19% of New Yorkers live below the poverty line
54.7 million people live in Greater Tokyo
1hr24minutes is the average daily commute in London

Clickhereto read the original article.
Posted by olivia at 02:40 No comments:

Lenin on the Danube 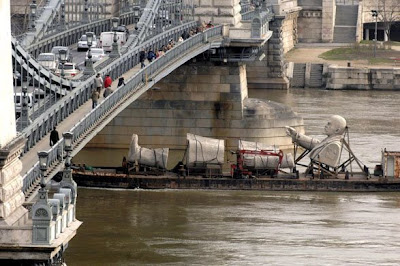 Just like the statue of Anubis which floated down the Thames on a barge last fall (see archives for October 2007) parts of a statue of Lenin to be used as a prop in a film floated under the Chain bridge which joins the cities of Buda and Pest.

photo courtesy Imre Foeldi/EPA
Posted by olivia at 14:18 No comments: 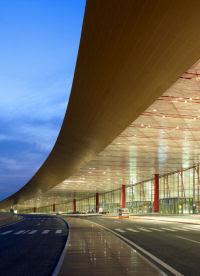 Completed in just four years, one of the largest buildings in the world was inaugurated in Beijing today without much pomp and circumstance. Terminal 3 at Beijing Capital International Airport is a state-of-the art building designed by British architectural firm Foster + Partners, which seems to be involved in most of the new constructions opening worldwide. The massive terminal, 1.3 million square meters, mostly under one roof, is supremely important for China's 2008 Olympics, and is one of many buildings in the capital signed by Western architects.

By 2020 it is estimated that the terminal will accommodate a frightening 50 million passengers per year. Environmentalists concerned about the increase in pollution in a city where athletes competing in the 2008 Olympics will be gasping for clean air, are not impressed by the engineering firm Arup's claims that Terminal 3 is the one of the world's most environmentally sustainable airports...

photograph courtesy of Fosters + Partners
Posted by olivia at 02:44 No comments:

constantly being updated: old and new favorite books about cities

"I came home on the last train. Opposite me sat a couple of London Transport maintenance men, one small, fifty, decrepit, the other a severely handsome black of about thirty-five. Heavy canvas bags were tilted against their boots, their overalls open above their vests in the stale heat of the Underground. They were about to start work! I looked a them with a kind of swimming, drunken wonder, amazed at the thought of their inverted lives, of how their occupation depended on our travel, but could only be pursued, I saw it now, when we were not travelling. As we went home and sank into unconsciousness gangs of these men, with lamps and blow-lamps, and long-handled ratchet spanners, moved out along the tunnels...."
Alan Hollinghurst, The Swimming Pool Library